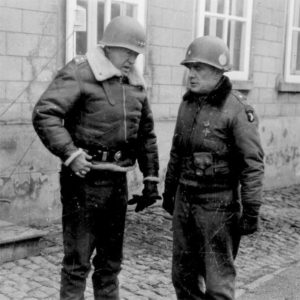 On December 16, 1944 the German Army turned suddenly turned and attacked the American and British forces that had been chasing it through Luxembourg and Belgium. It was the beginning of the Battle of the Bulge. Despite the fact that the Allies had long since broken the German codes, the attack came as almost a complete surprise. Under heavy cloud cover and taking advantage of some really bad weather – and therefore negating the superior air cover of the Allies – the Germans rolled. 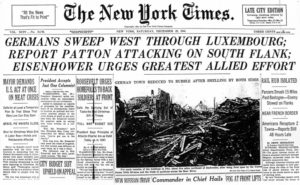 It’s hard to visualize this, today, when we know how it all turned out, but on December 19, 1944 the German Army was still formidable, large chunks of allied forces had been destroyed, cut off, surrounded. Since almost everyone fighting in Western Europe at the time thought the war would be over by Christmas, the attack was as stunning as it was unexpected.

So, when General Eisenhower, the Supreme Commander of all Allied Forces, held an emergency meeting of his field commanders on December 19th, it was serious. So serious, Eisenhower began the meeting by telling his generals to try and think of it as an opportunity, he wasn’t interested in panic. He was looking for ideas in the face of entire divisions reeling.

He didn’t get an idea from Patton, he got a plan. Patton would disengage from the German divisions in front of his Third Army and swing north to attack the Germans in the flank and relieve the cut-up and cut-off American Divisions. And, he would do it immediately. As soon as the meeting was over.

Ike and the other generals were incredulous, Ike went as far as to warn Patton to stop being ‘fatuous.’ Patton, though,

was deadly serious. Patton was the kind of general who planned for … well, almost anything, even if the odds of something occurring were very low. Perhaps his greatest fear was to be caught unprepared.

Patton was a very serious student of military history, He knew that the German army had not taken the offensive since Frederick the Great. Yet, he had his staff plan for one nevertheless. Just in case.
Which brings us to Villanova’s NCAA National Championship game against North Carolina last April. If you watch the last few seconds you’ll note the following: UNC’s Marcus Paige drained a ridiculous double-pump game tying three pointer with 4.7 seconds left. Timeout, the Villanova players went to their bench – all except ‘Nova’s 6’11” center Daniel Ochefu. He was busy mopping a wet spot just below the half-court line. It was a curious sight, a seven-footer busy with a mop while the rest of his team huddled.

The announcers joked about it, wondering aloud while 35 million people listened why he was working a mop in a tied game with 4.7 seconds left for the National Championship. 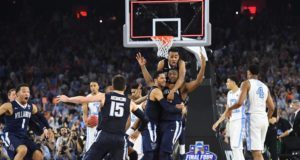 The answer was simple: he was making sure the spot was dry because he knew it was the spot where he was going to set the pick that would spring Ryan Arcidiacono to drive over half-court and set up the shot to win it. He was making sure neither of them slipped.

How did he know to do that? Simple. Villanova had practiced the game winning play – called Nova – hundreds and hundreds of times. They had planned for this precise moment for years, 4.7 seconds left was almost the optimum time for it.

There was no discussion in the huddle, no frantic whiteboard X’s and O’s and arrows. The Wildcat’s coach, Jay Wright, said “Run Nova,” Ochefu went over to the sweat slick and did the only preparation the team needed.

Arcidiacono had several options as he dribbled, all planned back in 2002. He had made that run with 5 seconds on the clock hundreds of times in practice. Every kid on the floor with him had been through it and all its variations time after time – always at the end of practice when everyone was tired and wanted to go home – just like the end of a draining game.

In the fourteen years Jay Wright has coached Villanova, they never had the opportunity to run the play in a game. It would have been easy to self it. But they didn’t and it just so happened that the first time they needed it it was there to win the National Championship.

That’s the thing about planning – great planning plans for contingencies that may never happen. Because, they do. Sometimes.